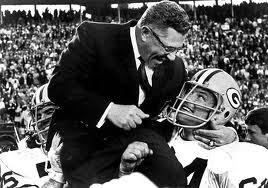 "The Character is Higher than the Intellect." - Vince Lombardi

The Vince Lombardi Trophy will be awarded to tomorrow's Superbowl victor. He is the sport's greatest coach.

In his early life, he contemplated being a priest and then an attorney. His football writings, actions, and talks are sprinkled with indirect references to Christianity as when he tells his team they "will pursue, with every ounce of effort in their bodies, pure perfection, knowing full well perfection is not achievable in this life, but in the afterlife. But, we will pursued it with dogged determination."

Players responded to his goodness. On the field he was beyond driven, but did nothing out of malice or deceit. His passion was to improve his players, and to build or expose their character. They trusted him and responded.

Fourteen Green Bay players he inherited from his predecessor became either All Pro or Hall of Fame caliber. The year before Vince arrived, the Packers recorded one win and eleven losses. In his first season, the Pac won seven and proceeded to win five NFL championships included the first two Superbowls.

The president of one of my international clients gave me a Lombardi book. It includes a DVD with a famous speech he delivered at the Waldorf Astoria. In the speech, Lombardi states, regarding personal, organizational, and social success: "the character is higher than the intellect." Vince was referring to sacrifice, courage, collaboration, and goodness; being honest, selfless, and self critical.

Tomorrow's Super Bowl will test this supposition. By most accounts, Ben Roethlisberger, the Steelers' star quarterback, is a bully. He reportedly demeans hotel staff and support people. He settled two recent aggravated sexual assault cases against women out of court. 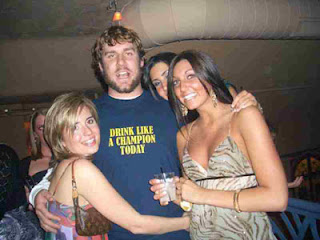 I am tired of bullies, people in powerful positions who use their status for selfish ends, getting the last laugh. We've seen it with the recent banking crisis, where heads of banks and their boards played roulette with their investments, were on the brink of failure, and walked away with bonuses underwritten by us, the taxpayers. They lie, are selfish, and narcissistic; behaviors opposite to those celebrated with Lombardi.

2010 was a wonderful football year for me. I attended two NFL games; the Jets vs. the Packers at the new Jets / Giants stadium and the Jets at the Pats on a Monday night. During our annual Thanksgiving pilgrimage to NYC, I saw a play on Lombardi. While watching actor Dan Lauria's excellent depiction of Coach Lombardi, I thought of my hall of fame high school coach, Ted Monica.

Coach is a Lombardi disciple and a Korean War Purple Heart. In fact, he knew and worked with Vince Lombardi and administered the Packers' draft efforts for over twenty years. He, like coach Lombardi, had an uncanny ability to muster courage, sacrifice, and a collaborative, or team, effort to raise performance to unexpected heights. We proved it. 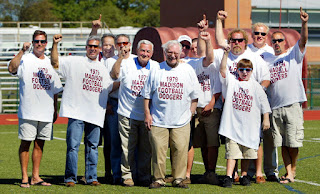 The picture above shows us, the 1980 senior class members, commemorating receiving the 1979 Star Ledger Trophy, recognizing NJ's top high school football team. We are the only Group II sized school to ever earn this distinction. This picture shows the recognition celebration during a home football game halftime this past September.

Our class of seniors never experienced a loss and finished our varsity careers with a perfect, 33-0-0, record. We'd gathered for our 30th high school graduation reunion. Our famed coach joined us. In addition, I spent time with the Monicas before and after this celebration and experienced the warmth usually present only with beloved family members. Vince Lombardi was also the first coach to state the critical element in team success is spirit, or charity, or brotherly love connecting teammates.

From my lineman's dream touchdown, to defeating a team loaded with superstars the day after I buried my mom, to starting on three consecutive undefeated championships and never losing a high school game, to reconnecting a friend with his 1977 Madison Championship ring thirty years after he earned it, Coach Monica's Character and Charity have been a beacon in elevating and sustaining me and my hope leaders beat bullies as goodness beats evil.

So, it will be interesting to see if Vince's postulate on character plays true. The Steelers are loaded with gifted football players, including Roethlisberger. Being a champion, based on Lombardi's teachings, requires more than talent. Will the force of Vince Lombardi's considerable aura allow the Lombardi Trophy to be handed to someone whose behaviors essentially mock its namesake?