Showing posts from February, 2009
Show all

Drive for Life: Just because You're Diagnosed with a Life Altering Disorder Doesn't Mean it's Time to Give Up!

February 20, 2009
John “Bake” (his nickname complements Brown point guard Alex Bynum’s “Shake”) McBride and I were on the same schedule during our 1980 freshman year at Brown University. We shared, along with twenty five other young men, the third floor bathroom in Perkins Hall. Perkins is the most removed dorm from Brown’s main campus. It was acquired from Bryant Business School and sits on the edge of Fox Point. Before gentrifying, Fox Point was a blue collar neighborhood filled with immigrant populations. When we started at Brown, Fox Point had fallen on hard times. Rumors had a robust street drug trade thriving around the corner, though I never witnessed illicit dealings. Suspicious characters flourished. Perkins has a typical brick and mortar institutional look yet attempts to reflect Le Corbusier edicts with pillars supporting its jutting first floor, to separate living space from the street. The roof became “Perkins Beach” when the weather turned nice, but between November and Apri
4 comments
Read more 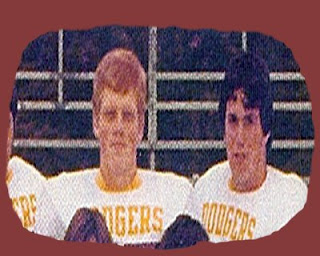 Expected: Today, the Arizona Cardinals or the Pittsburgh Steelers will be crowned Super Bowl Champions – football’s ultimate prize. To recognize this achievement, the winning team members will receive championship rings. Doubt: Is it possible to connect a football championship ring with its rightful owner after more than 31 years? Trials: Bernie Tiger, www.serenitysjourney.com , was mentioned in my October 2007 blog. We attended high school together in NJ and reconnected in 2004 after crossing paths at our respective child’s middle school orientation. Bernie’s son and my eldest daughter are in the same class at our Massachusetts regional middle / high school, attended by students from three abutting towns. Our meeting is Providence. It’s hard to avoid Bernie. He was the tallest person in the auditorium, and he looked somewhat familiar despite adding a few requisite pounds. A few days later, I saw him at a Blockbuster Video store. We stared at each other. I nodded, an
5 comments
Read more
More posts