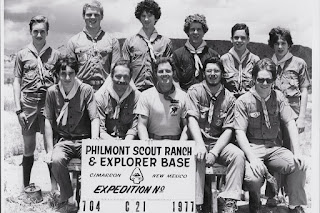 It was the last night on the course and everyone was looking forward to ice cream at base camp the next day. Ten days of hiking fifteen to twenty miles per day with forty pound packs on our backs, and eating rationed, dehydrated food, leaned our bodies. It got me in shape for football camp.

Our goal was to merge with another New Jersey group and to greet the sunrise atop the Tooth of Time, a jagged rock outcropping whose silhouette brands Philmont belt buckles, shirts, and coats, recognizing the famed New Mexico Boy Scout reservation.

It was a fitting end to an eventful ten days where I worked to keep our unit together and safe. John Gruber, the unit's adult leader, threatened to leave us three days into the trip. Eagles on our crew were squawking over extra food, and acting, according to John, like brats. He wanted to leave unless they stopped. With peer pressure,they changed. Also, my boots were falling apart, yet they finished the trail intact.

Our unit was filled with Eagle and Life Scouts. Rank does not always correlate with leadership. I was First Class - the lowest rank allowed at Philmont. Despite my lack of merit badges, the unit awarded me an iron nail we forged at Cypher's mine.

The blacksmith stated it was to be given, at the end of the trek, to the most influential scout. This nail sits on my office desk, a constant reminder of our final morning's ascent.

We woke at midnight. I cut my fingernails before bed. In the high altitude, my finger tips swelled. This and being dazed from two hours sleep made me unable to tie my pack and shoes. I was in a fog. I think Owen Bird or Mark Copas offered to help. Or maybe it was Neil Guthrie.

As we hiked, I couldn't open my eyes. My sleep was off. I'd wake every night between two and four AM and remained awake until about five. The extreme quiet, or distant noises, made my mind and heart race. Rest was impossible. Early in the trip, I thought a bear visited our camp as we slept. We found bear tracks the following morning. This impacted my sleeping patterns.

The trek was a testing ground. My mom was into her sixth year of remission, but she was hurting. This and my dad's related sudden outbursts created undue stress. My schoolwork suffered because I was truant and hanging with questionable kids. Scouting was great for me, but it was not like my father's experience. We was NJ's youngest Eagle recipient, ever.

Life's tougher knocks overwhelmed me. It was hard for me to look at my situation with perspective when comparing my results with other kids'. I felt like a loser and wanted to prove myself.

My plan was to follow and reflect on the two positive weeks. It was very dark. There was no moon. John and Mr. Ames, the other unit's leader, assessed the map and thought we missed the Tooth's trail. They suggested we blaze a new path connecting us with the Tooth's proper trail they figured was between the Tooth's big mountain outlined in the night's sky behind us, and a smaller mountain we faced.

With a frenetic bounce appropriate for his Teddy Roosevelt looks, including the handlebar mustache, Mr. Ames forged ahead on a small, rough, path. It resembled a deer path. Brush was pushed aside. It was not well worn. Our units followed until we came to the base of boulders. A scout from the other troop led the climb. As he crawled, he loosened some rocks and they were falling. Some scouts panicked and screamed about being hit. Someone yelled: “I broke my leg”. The leader endangered climbers behind him so John and Mr. Ames stopped him.

There was a private meeting between Mr. Ames and John, but I heard them. They did not want to climb back down the loose boulders with twenty two scouts in the dark, yet they had no idea what lay ahead. I offered to lead the expedition and felt an adrenalin surge. There was a solid faced rock between boulders. It seemed to have enough hand holds and moss to make a continued climb possible.

I was hyper alert, and very cautious. We realized we missed the correct trail leading to the Tooth of Time and we were in a dangerous jam. One slip would cause an avalanche. We climbed the mountain in front of the tooth. It was not a marked, or approved, area. It was pitch black. We were in the middle of a vertical boulder field. We learned later several scouts were critically injured a week earlier at this exact site, in broad daylight.

I was calm and sensed there was a solution. Not everyone was on board. About three quarters up the mountain, after maneuvering around a ledge while checking its stability with my heels, Mr. Ames lost it. He was saying to himself: "Oh God, what did I do? One slip and we will all die!"

I told him to relax and to keep moving forward. At the same time, my arms walked me, like on parallel bars, across a crevice as my legs dangled free. It was a black hole and I imagined a bear or snake was resting in it. Everyone helped each other across the hole. No one was injured.

A well traveled trail appeared. We followed it and rested on a series of ledges in a clearing. We watched the silver lined clouds framing the sunrise. Looming directly behind us was the majestic Tooth of Time, our intended destination. It was crazy, but I learned more by taking this unmarked path than by climbing the traditional, well traveled, Tooth's path. In some ways, this parallels my life. I am very thankful for sensing guidance and leading those 22 scouts to safety. At the ledge, I sat down, cradled my head in my hands between my knees, gave thanks, and slept.

There was a broad, safe trail leading from these ledges down the other side of this mountain to base camp. The ice cream and subsequent naps were refreshing. And, my positive outlook started me on a unique high school odyssey.

In the fall, I gave up Scouting to focus on football, wrestling, and track. My grades got better. Our football team went undefeated over the next three years and we finished top ranked in NJ my senior year. I graduated from Brown, coached college football, received a Masters Degree, and created a business. The attitude influenced by this wrong and dangerous Philmont Mountain path changed my life for good.
Posted by Matt Paknis at 4:50 PM 2 comments: