Slow and Steady Wins the Race? 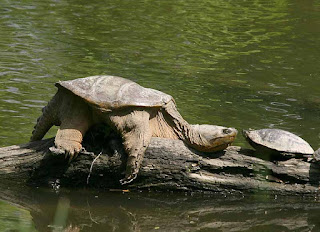 It was beautiful Sunday morning in New England. At six am, Milo woke me for his walk. We then headed east on route 6 towards Cape Cod to get the newspaper.

Returning on the same route moments later, a woman was standing in the middle of the road, staring at a huge lump in my lane.

From my distance, I guessed it was a large dog, fox, or worse, a person. My sense was it was still alive and this is what moved the woman from her car.

I stopped, pressed on the emergency lights, and rolled down my window. She approached my car and asked me to help. She was frazzled and on her way to work when she saw the lump.

I approached and was amazed. At first, I thought it was a young sea turtle. Every year, my family and I wait in moonlight on Melbourne Beach, Florida shores to watch 1500 pound Leather-back, Green, and Loggerhead turtles propel themselves with their flippers, and coded DNA, up the beach to dig massive holes to lay over 120 eggs.

They cover the holes and lunge back to sea. They return to the same beaches where they were hatched to lay their own eggs often after circumnavigating the globe. My brother in law's family also promotes the species' survival and carries, from these holes, just hatched baby turtles to the sea.

The turtle on route six did not have flippers. It had four huge feet with immense claws. It also had a pointed nose and was snapping. It was the biggest snapping turtle I've seen; almost three feet long and over two feet in width and height. The woman was afraid to touch it, and was afraid a car might hit it.

Remembering what I saw on the Nature Channel, I lifted the 30 - 50 pound turtle from its sides. It kicked with great force and its claws grazed me, but did not hurt me. It torqued its neck, but its jaws did not reach my fingers. I placed her on the side of the road where she was pointed.

The woman stated: "ah, it was actually heading in the other direction when I arrived." So, I lifted it again. It went through the same protective behaviors and hissed. I carried her to the other side of four laned Route 6 where a pond and swamp waited for her to lay her eggs. Based on its size, this turtle was over 100 years old. It's tail looked prehistoric. The turtle was safe.

The woman thanked me and we parted. The turtle reminded me of the sea turtles in the Gulf of Mexico and in the Atlantic Ocean facing this massive British Petroleum oil spill.

Turtles are known to be slow and steady. A famous fable pits a turtle against a speedy rabbit in a race. The turtle's persistence is rewarded and it wins the race against the rabbit who decides to use its anticipated extra time for selfish pursuits.

People in power at British Petroleum made decisions based on short term cost savings when they decided to fill the oil well pipe with known to be dangerous sea water instead of mud. This led to the nation's worst recorded environmental disaster.

The people in power at Goldman Sachs, and at other financial institutions, made decisions to make short term gains with investment vehicles they knew would hurt some clients. This led to the country's current financial collapse, its worst since the Great Depression.

The people running, and making decisions for, these institutions are not leaders. Like the rabbit, their selfish pursuits disrupted the long term good of the whole.

Like the diligent and well intended turtle in the race, the good in mankind and in the world will outpace these shortsighted, virtue lacking, selfish people in position of authority and their resulting disasters.

It is time to evaluate how we select and groom leaders; those entrusted to make good decisions. It's what I do for well intended organizations. This will be the focus of my next blog.
Posted by Matt Paknis at 7:03 AM 1 comment: