Everything we hear is an opinion, not a fact. Everything we see is a perspective, not the truth.
Marcus Aurelius 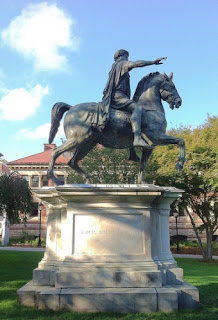 While in college I passed this statue of Marcus Aurelius at least once a day. Many years later, I discovered this quote of his. It resonates with me and applies to many of the horrific stories we are experiencing and reading today.

During the past year in particular and throughout my life, in the news and in person, I've witnessed people associated with the above positions, organizations, accomplishments, and status symbols assault, abuse, molest, bully, deprave, and sabotage. These predators project themselves as achievers affiliated with respected and admired institutions.

In reality, they are twisted, weak, feeble, spineless, and despicable examples of how our society rewards results more than character and values and decent behavior. These perpetrators use their power and position to exploit vulnerable children and subordinates. They project false images to perpetuate their ruse.

Based on the Staples Scalometer, 55% of a voter’s decision is based on how a candidate looks - his or her presence. 38% is based on his or her voice. Only 7% is based on what the candidate actually says. If he were to run for office today, our most admired President, Honest Abraham Lincoln, would not be elected using this criteria.

It appears we have lost the ability to separate bad people, or grown problem children - those with high ability yet deviant beliefs and behaviors, from positions of authority.

So, what can we do to filter bad people from powerful positions?

1. Let's focus on the facts. Just because someone works for an esteemed company or organization, has strewn together or led others to many victories, lives in a nice house, drives a nice car, has a certain degree, is in a position of authority or in a position where they are purported to express concern for, and help, others or has achieved some silly rank from a childhood organization, this does NOT make this person a success, or someone to be trusted (meaning vulnerable people become dependent on this person). These deviants are like foxes in a hen house and spend a good portion of their lives trying to determine how they can put themselves in position where they have access to vulnerable people while appearing like saviors and do-goods.

Good people are honest, transparent, selfless, and self-critical. They have a history of solving, not causing, problems.

Bad people lie, project false appearances, keep secrets, are selfish and self focused and narcissistic - they cannot critique themselves. Stay away, and keep your kids away, from people who are eager to tell you about their successes.

If anyone in your personal or professional life ever states: "let's keep this secret", this is a sign to get the hell out of the relationship and to report the "secret" to a trusted friend, relative, teacher, coach, or authority.


2. If you have been abused, my concerns are with you. There is a great organization called Male Survivor where you can receive sound guidance and support. The website is: http://www.malesurvivor.org/. You may also contact me and I will do everything in my power to help you.

3. Almost everyone has a phone today with a camera. "The eye in the sky doesn't lie" was a quote we often referenced in football practice while I played and coached to recognize good athletic performance and to correct problems. Granted, it is hard to access a phone when a predator pounces, but we have this technology, and setting up a camera when assault is anticipated and catching it on film can expose the truth. Think of the response to the video of Ray Rice knocking out his fiancé.

4. The five steps to recovering from abuse include:

A. Sharing Secrets with a trusted, certified, and proven counselor. Going public if needed.

D. Choosing healthy responses and the behaviors in the moment reflecting true values, leading to positive outcomes and change.

E. Choosing to surround oneself with healthy people and good people - honest, selfless, and self-critical.

It is not wrong to want nice things for yourself and the people you care about. However, when these accomplishments are used to disguise deviance or to incentivize secrets and abuse, the perpetrator must be exposed and brought to the public's attention, so we can learn to look deeper than appearances.

As always, if I can help you, please contact me at matt@mattpaknis.com.

Posted by Matt Paknis at 6:50 AM No comments: