Showing posts from June, 2018
Show all

How can I respond? 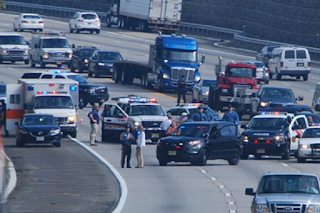 Suicide is America’s tenth leading cause of death, taking 45,000 lives each year. The crisis was accentuated when public figures killed themselves as the Center for Disease Control and Prevention (CDC) released recent data showing steady increases. This moved me to join another public discussion to determine whether it’s possible to know when someone’s suicidal. If so, and assuming life is the healthiest choice, it’s critical to know how to intervene and help. Driving while listening to a scene from Unbroken, Laura Hillenbrand’s book about Louis Zamperini, inspired me. A giant, compassionate, Japanese war prison guard protected Zamperini from tortuous guards. He whispered to Louis: “You Christian, I Christian.” As I thought about stopping bullies, an eighteen-wheeler on my right lost control. It was mid-morning, mid-September. Three packed highway lanes cruised at maximum speed. Brakes pumped and the truck skipped into the service lane. A parked Jeep forced the truck back at me. E
Post a Comment
Read more
More posts