"Then you will know the truth, and the truth will set you free.” John 8:32 Berean Study Bible 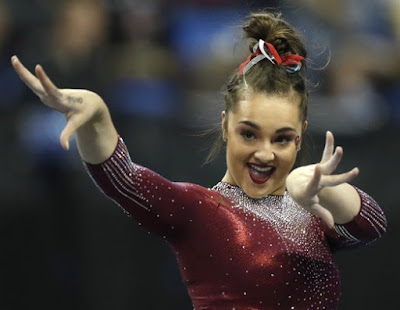 She ended the championship meet in triumph, with a string of performances that stamped her as one of the greatest collegiate gymnasts in history!

Below please find the five steps regarded by experts to help abuse victims and targets recover from trauma. These include:

a. Sharing all abusive experiences and secrets with a trusted, licensed / certified, recognized, and proven trauma counselor and, when ready, ultimately going public to expose the abuse and to protect potential targets.

b. Identifying cognitive distortions and irrational mental filters based on fears and criticisms—separating facts, and the truth, from abuse related opinions and false conclusions.

c. Safely integrate the trauma into the past by acknowledging unhealthy and destructive trauma responsive thoughts and behaviors associated with these cognitive distortions and opinions.

e. Choosing to surround oneself with healthy and good people—honest, selfless, and self-critical who reinforce healthy thoughts and actions leading to positive outcomes.
Posted by Matt Paknis at 9:18 AM No comments: 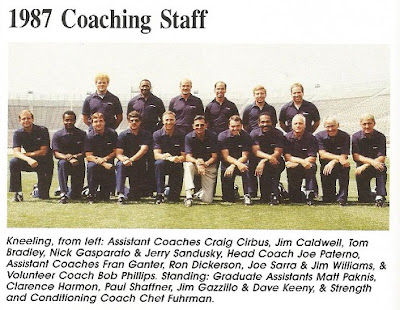 Last night HBO aired a movie about Paterno's fall from grace as Penn State's admired football coach. It failed to reveal the Paterno I experienced when coaching with him and Sandusky as an assistant Penn State football coach in 1987 and 1988 and how Paterno's true colors facilitated Sandusky's rampant pedophilia.

I experienced Paterno as a bully who demanded bizarre player witch hunts and staff behaviors. These contradicted his win the right way mantra. He also threatened staff and players with personal violence, he made racist statements, and he isolated, belittled, disenfranchised, and demeaned decent players and staff with tyrannical rage while projecting a calm and concerned public persona in the media. His true self so contradicted his beloved public image to this day people refuse to acknowledge Sandusky's crimes and Paterno's culpability.

Paterno's ruse and permission set the tone for Sandusky to model and create a sham of a charity where Sandusky committed the most vile form of bullying. All abuse is rooted in a predator's disturbed needs for power and contol. Abuse flourishes in organizations only where complicit officials allow it. Great teams elevate their most vulnerable. Bad teams, like those officiated by Paterno and Sandusky, exploit and abuse them.

We are all flawed, and there is a spectrum. The movie failed to show how Paterno's own bullying and his deceptive, selfish, and narcissistic true colors allowed and facilitated Sandusky, whose disorder is on this spectrum with sociopaths and serial murderers, to rape children for decades.

The movie failed to show Paterno's most ruthless, mean spirited, and deceptive character and how THIS facilitated Sandusky's crimes. Paterno was so focused on spinning and projecting his own web of lies he got caught in Sandusky's deception.

As a result of my exposure to Paterno's debilitating actions and organization, I pursued an MBA and have dedicated my last 27 years to helping organizations around the globe thrive with healthy leadership and teamwork while rooting out bullying and abusive behaviors. Simon & Schuster will be releasing my book,"Successful Leaders Aren't Bullies" in September.

It's based on cases I've experienced in my international consulting practice and is written to help readers identify, stop, address, and transcend all forms of bullying and abuse, including childhood sexual abuse.

Thank you for your consideration and support. Please let me know if I can help you or your organization overcome horrific setbacks to thrive.
Posted by Matt Paknis at 8:47 AM No comments:

The film stars Al Pacino as Paterno and chronicles Paterno's fall from grace in November 2011 when he eclipsed the NCAA's all time coaching wins record AND was fired from PSU for his culpability in allowing Sandusky to sexually molest young boys.

I worked as an offensive line coach at Penn State with Paterno and Sandusky in 1987 and 1988 and their bizarre power dynamics and narcissism turned me off to coaching.

It also motivated me to earn an MBA and help organizations rid themselves of bullies and bad management practices.

The film appears to allow the viewer to decide whether Paterno was complicit and knowingly allowed Sandusky to molest boys for the sake of Paterno's drive to become college football's all time most winning football coach and to protect his and Penn State's reputations.

Having dedicated my life to helping leaders and organizations stop, address, and transcend vile bullying behaviors to help organizations thrive, two truths have proven evident and consistent in officials in management positions where bullying, including the sexual abuse of children, flourishes. Either

1. at best, due to their own narcissism, selfishness, and deceptions, these officials do not have the moral fortitude to understand and acknowledge the evil being practiced under their noses, or

2. at worst, these officials knowingly keep these abusive and bullying behaviors secret to remain in power and to maintain their and their organizations' false appearances.

As a protected, and bullying, assistant coach under Rip Engle at Penn State, Paterno was known by players as "Joe the rat". He knew, and would screw, on every player who stepped out of line. He knew everything about everyone.

I found this to be the case when I worked for him when he was head coach. He'd even create typical bullying traps in an attempt to target and catch players he suspected might tarnish his brand and image. With Paterno, I choose option 2. He made it his job to know everything about everybody in the Penn State football program, including Sandusky. Paterno was complicit.

Just as a coach, who was trying to encourage me to work for the late, great, Don James instead of Paterno said to me: "don't let JoePa smoke you." His veneer was slick and his brand was impressive.

But, there is no way in hell Sandusky's brand of evil ever, ever, exists under the watch of a true and great leader, or man.

Paterno was a phony and I only thought his duplicity involved his pontificating about winning football games the right way while overseeing a corrupt football program. A fish stinks from the head.

Enjoy the movie, and I hope you enjoy my book, written to help good leaders and bullying targets stop and transcend bullying, scheduled to be released in September.

Thank you for your consideration and support.
Posted by Matt Paknis at 5:08 AM No comments: