Showing posts from May, 2012
Show all

Can you spare a little help?

May 15, 2012
Recent tragedies hammered home, to me, the impact of time. We had a family tragedy within a week of famed linebacker Junior Seau deciding to end his life. Time factored into both deaths. Based on reports, we assume their time was spent in apparent inescapable pain; internal demons and signals harassed their brains with continuous unwanted pain inducing triggers. We assume they felt there was no escape; no apparent way to change the ebbing tide of locked despondency. Based on articles, Junior projected an image of strength and optimism. According to reports, men in his culture are expected to be strong and supportive. His role as an NFL linebacker was to be the cog in a fearless front of defense. Based on his physical gifts, he was able to project this image in his play for almost 5 times longer than the average NFL player's career. And, Junior was considered one of the best in this role. He was rewarded for not being vulnerable, or human. This sense of despair can hap
4 comments
Read more

Who do you trust? 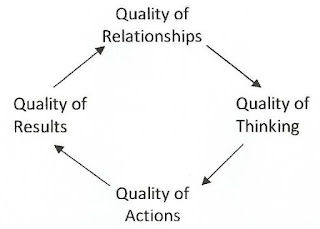 Trust is a popular corporate buzzword. It creates, according to Tom Peters in his seminal work "In Search of Excellence", the highest form of human motivation. A person experiences trust when he realizes people or institutions or systems or equipment won't allow him to be hurt when he is vulnerable. We are vulnerable when we buy a product or service, when we share private or personal thoughts, and when we take risks. We are willing to follow people we trust because we believe our best interest is served by them. They won't hurt us. Trust lubricates the cycle of effectiveness where trusting thoughts influence trustworthy actions to impact positive results to build trusting relationships. We trust doctors to heal us when we are sick or injured. We trust banks to secure our assets. We trust teachers to share the truth. We trust coaches to build skill and psyches. We trust institutions to protect our interests to propel the greatest good. In the past six
1 comment
Read more
More posts