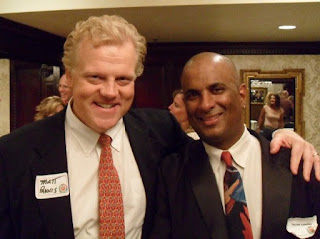 10. "Did you hear that?" On a recent trip to our old neighborhood's market, I saw the mother of a student from Lilli's preschool class. I asked: "excuse me, do you have a son who attended "Child's Play"? Shocked, she turned and responded: "well yes, about twelve years ago. How do you remember?" Not sure she'd appreciate my honest response, I offered it in Holiday Spirit.

During their class reading time in 1997, my daughter Lilli sat on my lap and her son asked if he could join us. He made funny faces and expressions to support the story line and checked my response. He leaned close and asked in hushed tones, "did you hear that?"

I asked "what?" Again, he asked: "did you hear that?" I responded: "what?" His excitement and approval seeking showed he hoped for the universal response (laughter) to his bonding behavior. He got it when he said: "I gassed!"

9. Birdie in the window. In unison they shrieked: "It's moving! Get here quick! Daddy, come here fast! Help it!" A sparrow flew into our back porch glass slider and lay on the porch with its head twisted at 90 degrees. Its legs and wings fluttered slow. It looked bad.

The bird kept moving when stroked with a leaf stem. It responded, but it's head stayed at an awkward angle. I lifted the bird and massaged its tiny head and neck. They straightened, but the bird was dazed and struggling to breath. Marisa held it. She kept massaging its back, and it expectorated a bloody seed. It breathed normal. I collected a box, soft rags, some water and bird food.

The bird batted its eyes and moved its head with improved ease, but it appeared too weak, or stunned, to fly. We placed it in the box with warm rags and nourishment. We left to select a Christmas tree. When we returned, the bird was gone.

At 5:30 the next morning, upon returning from my walk with Milo, about six of these sparrows greeted me in song, perched from wisteria overhanging our porch. Never before nor since has this happened.

8. Milo. This labradoodle joined our home one year ago today. He weighed ten pounds. He's all black with a white chest crest and paw. His fur is soft, like human hair. He does not shed. He's friendly to people and animals, and gentle. He offers unconditional love and friendship to my teenage daughters and young son. Milo thinks he belongs on our laps, yet now weighs over 100 pounds. 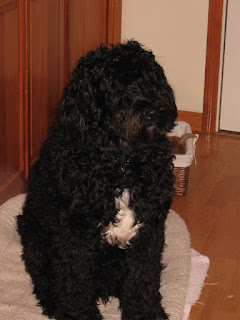 7. Call 911, or Bill. On December 12th at 5:45 PM I drove to collect my daughters at the movies. I headed north onto route 28, and just above the Rochester, MA tree line, I saw a huge flame with flaring sparks shoot across the dark horizon. It appeared to land in these woods. I stopped the car, called 911, and waited to hear the explosion. None followed. The girls saw nothing.

Everyone I asked saw nothing, except for Bill. My scientist friend and his wife witnessed this precursor Meteor from western Massachusetts while visiting their son at college. Bill was scheduled to wake at 2:00 AM the following morning to watch the complete Geminids Meteor Shower and was amazed by this early, giant, single meteor display. None of the scheduled meteors matched it size or beauty. I can find no one else who saw this meteor except Bill, his wife, and me.

In the summer of 2008 Bill's family lost their fifteen year old daughter to leukemia. Lauren was my daughters' best friend. Like this meteor, she was full of energy and possessed an indelible presence, forever etched in our hearts.

6. UMass Band In October, I joined Bill and his son to watch the University of Massachusetts football team play fourth ranked UNH. It's a fierce rivalry and the game was incredible. UMass won on its final drive.

Despite my love of football, I was most impressed with the UMass band. Its sound, size, and song selection are first rate. Music lifts the spirit. It was an uplifting, and unexpected, professional concert.

5. Philly Cheesesteaks I am a New York Giants fan and attended their games at Yankees Stadium and at the Yale Bowl. In 1976 I attended opening day at the soon to be demolished Giants Stadium. I played at this stadium when my high school football team won its 1978 State Championship (#77 below). I had an NFL Free Agent tryout with the Giants. I am also a Yankees fan. My Brown "offensive" linemate Jeff is an Eagle's fan. He grew up in Bucks County, PA rooting for Philadelphia's professional sports teams.

When possible, we attend Giants vs. Eagles games with Jeff's season tickets. This past March, we scheduled to attend the November 1st game in Philadelphia. As the stars aligned, both his Phillies and my Yankees made the World Series. For the first time in professional sports history, an NFL game including teams from the same cities as those in the World Series played on the same day in the same city.

We attended the Giants vs. Eagles NFL game at 1:00 and the Phillies vs. Yankees World Series Game at 8:00. At both venues we sat about twenty rows from the field. The Giants lost, but the Yankees won this fourth World Series game leading to their 27th championship. The day eclipsed when, at the World Series, I recognized a Penn State player I coached in 1987. We reminisced. This NY sports fanatic dream day culminated at 11 PM when the three famed Philly Cheese steaks I ate at 10 AM settled.

4. Arnie's Wedding I sublet a room from Arnie the summer before my senior season at Brown. We have many common interests including sports, entrepreneurship, culture, and people. In serious jest, we created an ideal date profile and hung it on the refrigerator to compare notes and standards.

It was an elaborate list and I struck improbable gold early when I met Linda while Arnie and I shared this apartment. I'm not surprised Arnie married, but based on the list's criteria, it's basically impossible for someone to meet all those expectations. Felicia does.

Their wedding filled their home with love, friendship, music, food, and an unanticipated mini Brown reunion.

Cindy: Three weeks before my scheduled business trip to San Diego last March, I received a Facebook friend request from my good high school friend, Cindy. She moved to LA to pursue acting in 1991 and we lost contact. The last I saw Cindy was when I was up with infant Lilli at 2:30 AM, and Cindy was on TV with Jane Fonda selling an exercise program. We enjoyed lunch on San Clemente's ocean pier. Cindy also visited our family this past New Year's.

Nayan and Janet: This past summer I received a Facebook friend request from Bev, my Madison, NJ next door neighbor. She forwarded my contact information to her younger sister Janet who is one year to the date older than me. For a good portion of my first fifteen years, we all played a variety of games including tag, croquet, lawn jarts, volleyball, and badminton in our adjoining yards.

Starting when I was a toddler, I also played almost daily with Nayan. His yard abutted our property in the back. We built forts, played sports, and palled around for most of my first fifteen years when sports and my family's move to an adjoining town separated us. We are connected via Facebook and this connection brings me great comfort. 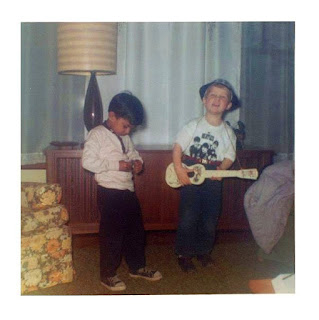 My mom took this picture of Nayan and me when we were about 4. I'm wearing Beatles garb and playing a plastic Beatles guitar from my aunt who attended their concert. This is telling because Nayan now produces major recording artists.

Janet, Nayan, and I never played together. It appeared Janet was called inside when Nayan joined us.

Both Nayan and Janet graduated a year ahead of me in high school. Their 30th reunion was this past fall. Thanks to my sports teams and our high school's peer counseling program, I was close to this class. Thanks to the internet, I reconnected with many of my friends and decided to attend their reunion. It was great seeing everyone, especially my wrestling coach, below, and my wrestling / track / football team mates.

What I cherish most is this picture of Janet, Nayan, and me.


Ramona: Ramona and I connected in geometry class, sophomore year in high school. She has a spark and it's ignited her to become one of four black women in America with both Legal and Doctor of Philosophy Degrees.

Via Facebook we reconnected. She invited me to speak at The University of Maryland, Eastern Shore. I was delayed on takeoff because the FAA's computer system failed. My connecting flight in Philadelphia left premature. I missed the talk, but was able to spend time with the panel members and coordinating students. It was great to see her influence on these students.

2. Business - It was a year filled with unexpected opportunities to offer keynote talks and seminars about transition, resilience, and growth at conferences, at universities, and in organizations. I also earned new clients and facilitated executive team development and strategic initiatives. Many new and existing clients hired me to create, and then sent me around the globe to deliver, management and leadership selection and development programs. These were offered to large, small, and individual audiences.

It's been a twenty year overnight success, and labor of love, refining, delivering, and transferring the traits great parents, coaches, teachers, and leaders use to influence constructive personal and organizational change. Your referrals and recommendations are most appreciated. Thank you.


1. Family Reunion My immediate family imploded when my mom died. I was a senior in high school. My dad remarried within the year and factions grew. I focused on my education, football, faith, friends, career, and my new family, but the immediate changes were difficult. My support structure was gone. I kept a respectful distance. It's been almost thirty years since and this past summer, for the first time, my whole and half siblings, their offspring, dad, and stepmother gathered at Hilton Head for what we hope is the first of many such reunions. Positive relationships foster great energy.

My hope is the New Year brings us more opportunities to connect.
Posted by Matt Paknis at 2:05 PM 3 comments: